Young people are living at home with their parents longer and often moving back home after failed attempts at moving away. While these living arrangements often present problems of their own, it can make adjusting to an “empty nest” even harder when the time comes.

For some parents, what’s supposed to be a cause for celebration and relaxation can sometimes turn into feelings of sadness, loneliness, depression, and distress. But with modern technology, staying in touch, and even caring for older family members, can be easier than ever.

To understand how empty nesters are adjusting in a digital age, we surveyed over 1,000 people (both parents and their children) about their experiences moving apart. Read on as we break down whether parents or children are more likely to keep in touch, which technology they use, and how the various platforms can make them feel more (or less) connected. 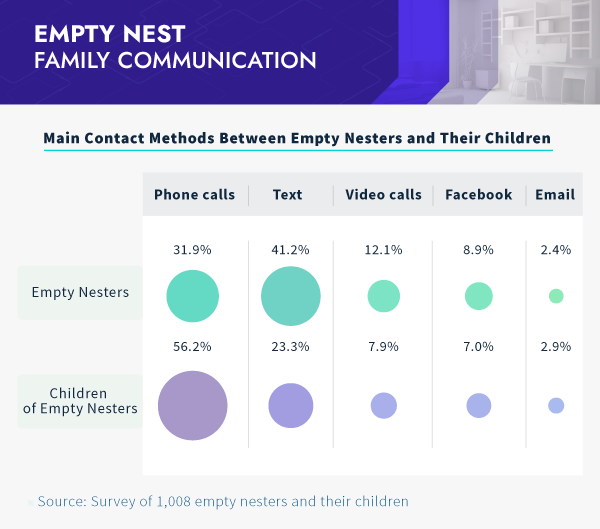 Young people have a reputation for avoiding phone calls. In fact, common reasons for avoiding picking up the phone often come down to not having enough time, being unable to multitask, and trying to avoid conflict. While the art of phone calls may be lost on millennials, they might be willing to make an exception for their parents. 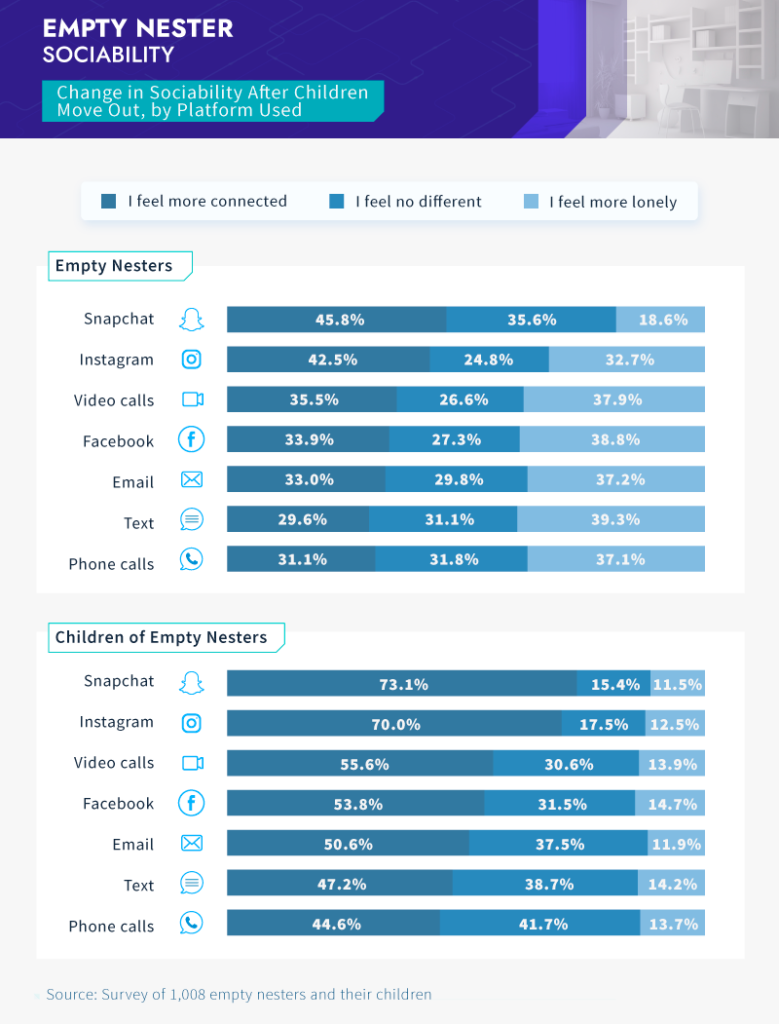 Moving out can be challenging for young people, but the empty homes they leave behind can be equally as difficult to cope with for parents. While a certain level of grieving may be normal, the empty nest blues aren’t supposed to be widespread.

For young people living at home longer or moving back in with their parents, that separation later in life can lead to anxiety of its own. Digital communication may be more successful at helping both parties feel more connected.

Seventy-three percent of children and nearly 46 percent of empty nesters said they felt more connected using Snapchat to communicate with each other. Instagram was nearly as effective, but other forms of digital communication might do more harm than good. Video calls, Facebook, emails, texting, and phone calls were all rated by parents as making them feel more lonely, an experience not shared by children of empty nesters. 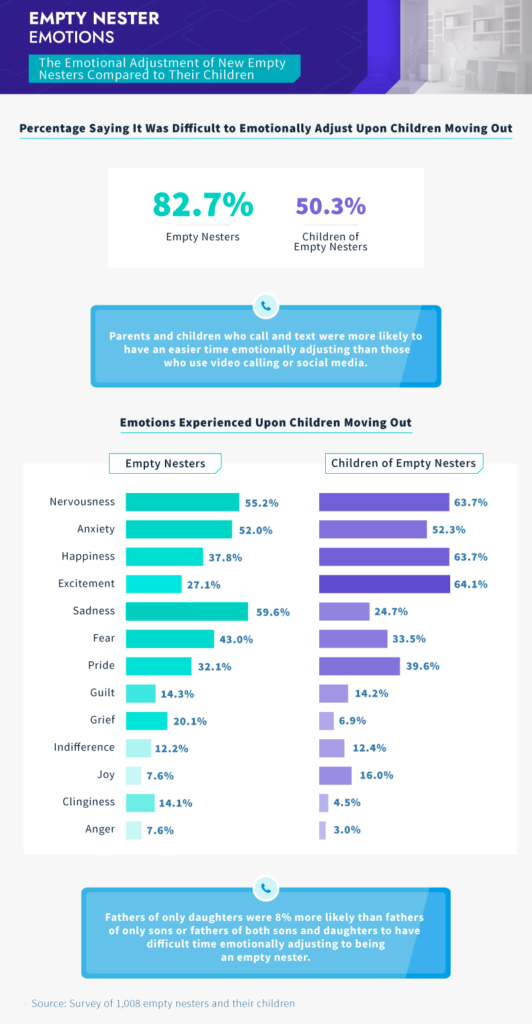 The sadness and depression that sometimes comes with a newly emptied nest might not be immediately obvious. According to experts, signs of empty nest syndrome include feeling a loss of purpose in daily activities, emotional distress, stress between spouses, and anxiety about their children potentially struggling to cope too.

Parents are far more likely than their children to struggle with adjusting to an empty nest, though. Nearly 83 percent of empty nesters admitted to finding it difficult adjusting emotionally to life after the move, compared to 50 percent of children. While more than half of children experienced nervousness (64 percent) and anxiety (53 percent), they also felt happiness and excitement (64 percent each). In contrast, sadness (60 percent) and nervousness (55 percent) were the most common emotions experienced by empty nesters.

While parents were often less likely to initiate phone calls to their children, nearly 35 percent of both kids and empty nesters who made time to talk over the phone found adjusting to the move easier – more than with any other form of digital communication. 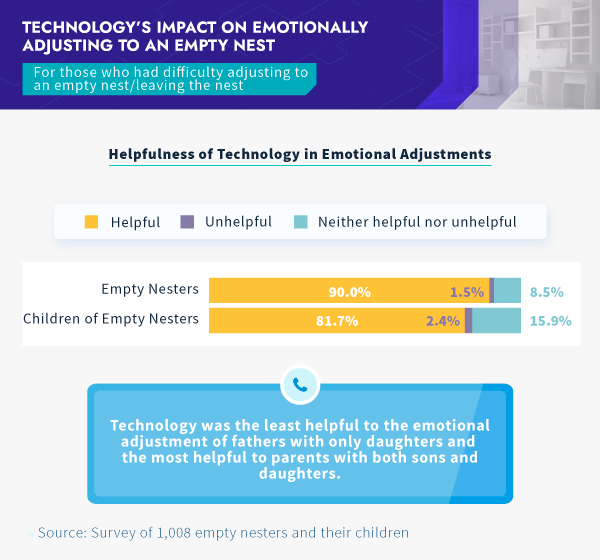 Despite generational gaps in the way parents and their children use social media (particularly among millennials and baby boomers), Facebook, Instagram, and Snapchat can help people in long-distance relationships (including families) feel more connected. 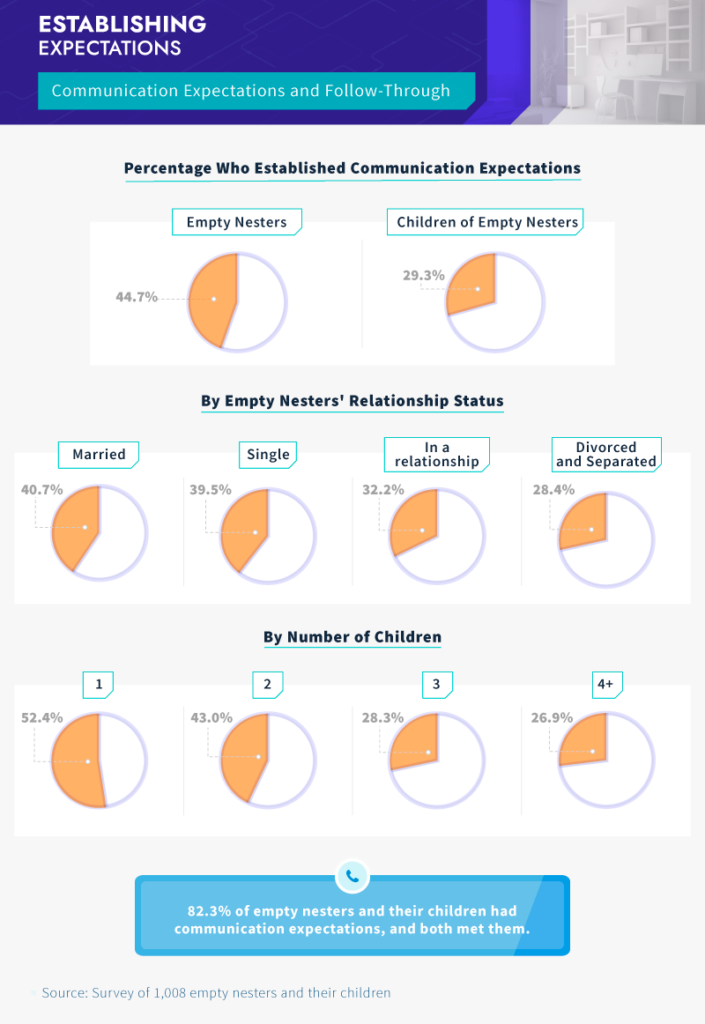 One of the best ways to manage the empty nest is to make a plan and set expectations for what life will be like. While some parents may eagerly await the day their children leave, others may live to dread it. Knowing where they fall can help newly minted empty nesters establish a rhythm in terms of visits and communication.

In preparation for the move, 45 percent of empty nesters and 29 percent of children established a communication schedule. Even though married parents might have each other to lean on, they (41 percent) were more likely to set expectations for contact than single (40 percent) or divorced parents (28 percent). Parents with fewer children might also be the most nervous about living alone, as more than half (52 percent) with only one child established communication expectations, compared to fewer than 1 in 5 with three, four, or more children.

Families who made promises to each other about staying in touch were fairly likely to keep them. Around 82 percent of empty nesters and their children said they met their communication expectations. 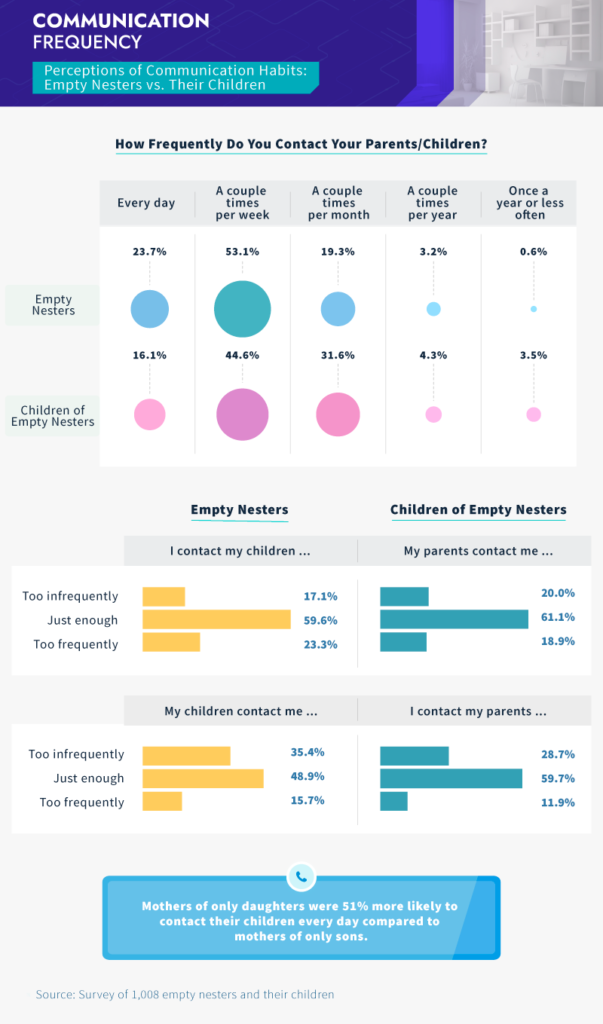 For children who recently moved away from home, there’s actually such a thing as staying too in touch with parents. If children pick up the phone every time they feel lonely, aren’t sure how to manage a situation, or just need someone to vent to, they could be stifling their growth and independence.

As you can see from these responses, parents are pretty cognizant of smothering their children once they’ve moved away. One mother simply requested that her children post online to Instagram occasionally so she knew they were OK, while another mother admitted to expecting a video call with her daughters every day.

A New Age for Empty Nesters

Growing up and moving out of the house is a fact of life, even if it’s sometimes delayed by a few years. With so many young people moving back home after an extended period away, the distance can be especially hard for some.

Still, communication in a digital age has made it easier to stay more connected. While it’s still possible for parents to call their children too much, certain social media platforms (like Snapchat and Instagram) can make the emotional strain of losing physical touch more bearable for parents and children alike. If you’re fond of selfies, though, you might want to be careful not to overshare; you never know when Mom or Dad could be watching your posts, after all.

These survey data rely heavily on self-reporting. Self-reported data contain issues such as selective memory, telescoping, attribution, and exaggeration. These issues are present particularly for respondents who are remembering the emotions and specific communication habits surrounding moving out themselves or when their children moved out. The data were neither weighted nor statistically tested and, thus, are based on means alone.

You don’t have to worry about being left out in the cold on this story. We welcome the sharing of our research, study results, and any related graphics for any noncommercial use. In return, we ask that you include a link back to this page in your story so that our contributors earn credit for their work. 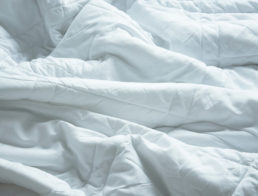 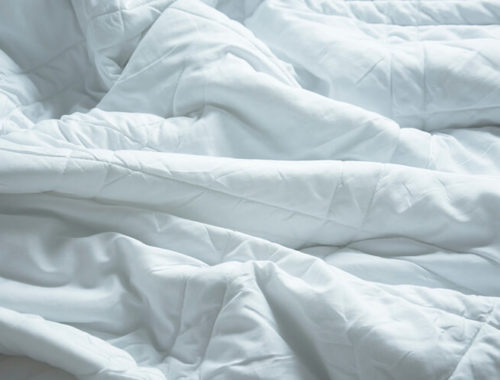 Do you find yourself waking upRead Article